Never do lunch with me Names changed to protect the embarrassed!

Pretty soon certain people are going to stop meeting me for lunch. some of you may remember the last time i met up with friend E for lunch. this time we did it again, with similar, disaster results.
Traveling to Portsmouth we knew it was going to go wrong when Friend "E" said she had taken the wrong turn towards Portsmouth and transporting friend "M" ended up the wrong side. Then she couldn't find a suitable space in the car park so just dumped the car where she could.

We decided to try a restaurant at Gunwharf Quays and not the "slug and lettuce" like last time.  Deciding on Franie & Bennies our first battle to was to get there. Needing to use a lift was not a problem, but only one seemed to work and apparently there was a pushchair convention in it.
Arriving at F&B we overheard a woman storming out and stating in disgust "Im not waiting an hour!". Being the brave soul out of the party I approached the desk and asked the male if it was a long wait, he responded "no, as she had a big party and he could seat us in 30 minutes". Checking with E and M we decided it was no big deal and could we sit outside. He responded we couldn't eat as it was "food in but could drink outside". I deftly took the pager and grabbing drinks we sat outside.
While chatting a female server came up and asked if we had ordered yet. telling her the man inside said we would have to wait, she said it was fine her section was filled and she would take our orders. Just then the pager went off, so she and I went inside and told the man what was happening. The two of them then had a major discussion over sitting inside or sitting outside (where others were already eating) and he said downtrodden that it was fine.
Going back outside i explained what happened and that caused great merriment.  I asked the server if this was a problem, she said no and brushed off the incident.
On the arrival of the food, i noticed mine was a bit on the luke warm side. The jacket wasn't melting the butter gives you some idea.  I went inside and saw the man again and explained the situation. he said he would send my server out.
After 15 minutes (just over) our server walked up and asked if everything was ok. I was still sat there with the plate. I explained it wasn't , she apologised manically and said that she hadn't got the message about the complaint. She then suggested an alternative and promised to deal with the man behind the desk.
A replacement arrived - a chicken burger and that was promptly consumed with gusto, The rest of the meal was the usual hilarity and censored conversation.
At desert time, our server suggested some decent choices which went down really well.
As is natural i had to make a trip to the neccessarium and only finding the accessible toilet decided to use that one. The maintenance left a little/lot to be desired. As shown in the picture.
Rounding off with coffee our ever pleasant server checked everything was all right and we paid the bill. they even remembered to remove the offending luke warm steak!
we left vowing to give a suitable review of our experiences and hoping that one day we will not have an experience we can blog about!

so F&B here is the broken toilet. shocking! 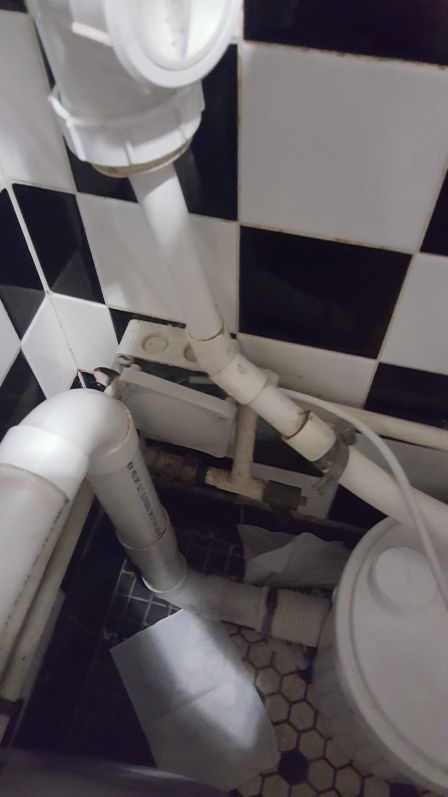