Cycling set up to fail? or too dangerous for its own good. Featured

The greatly discussed covid cycle lane or AKA wands of change AKA traffic jam creator was the subject of another FOI asking for a report on the safety review and consultation before removal . Here is an extract of the report with the most interesting areas highlighted. You can download the full reports and the unsafe/not fit for use sections at the end.

Due to the limited time available as set out in the grant conditions, it was not possible to undertake wider public consultation. The Traffic Management Act 2004 has been specifically amended to enable swift implementation of these emergency works. Consequently, consultation was limited to key stakeholders including, West Sussex and District/Borough Council Members; emergency services; bus operators; Freight Services and key WSCC Officers. It was expected that District and Borough Officers would undertake the necessary internal consultation with their own Members.

We remain in regular contact with all three emergency services and are closely monitoring the impact on blue light services. Sussex Police have reported one incident where they were unable to pursue a blue light call due to Pop Up Scheme congestion in Chichester, when a suspect continued by foot from a moving vehicle.

West Sussex County Council have confirmed that emergency services responding under blue light emergency may use the temp cycle lanes if they cannot navigate through traffic but should be aware that they are likely to encounter cyclists and should exercise appropriate care.

A safe space working group meeting was held on 01/10/2020, representatives from ambulance service confirmed there have been no specific concerns over the Chichester scheme in previous 7 days.

Casualty data was reviewed before design and implementation of the route to compare with data for the duration of the route whilst live. Data for the first 6 weeks of route is not currently available but will be presented in future reports under this section. It is understood that there have been no known accidents.

Road Safety Reviews were undertaken at the end of September by a qualified Road Safety Audit team.

West Sussex County Council has been assured that there is no major safety issues expected to be reported at this time. The safety review has acted upon all safety concerns and adjustments of schemes have been actioned for items such as signage and roundabouts.

So the council doesnt think its unsafe, that there are no known accidents (just incidents) and everyone will dance down the road hand in hand

WSCC Officers conducted a number of recorded and timed drive throughs of the Chichester scheme, in response to public concerns about traffic congestion and travel times:

The speed limit throughout the area affected by the cycle lane has been reduced from 30 mph to a temporary speed limit of 20 mph. The data captured from the Avenue de Chartres vehicle lanes has showed that the mean speed (across a 24 hour period) throughout the Northbound and Southbound lanes has remained similar, changing from an average of 32 mph to 31 mph after the scheme was introduced. Similarly, for Site 86, Oaklands Way, the mean vehicle speed has remained constant, 28 mph Eastbound and 24 mph Westbound.

So despite the lower speed limit, the actual traffic speed hasnt altered.

All direct scheme relevant communications received are being noted, with a standardised response being sent to customers where appropriate. The Breakdown is as follows:

Since the online survey has been live we have received a total of 2684 completed surveys.

The survey asked the respondent if they had used or intended to use the new EATF A286 Chichester ring road (2km) temporary (“pop-up”) cycle lane with 344 having used it, 87 having intentions of using it, 1909 having no plans to use it and 344 not yet used it.

The survey also asked “Would support or oppose the A286 Chichester temporary cycle lane being made permanent?”

Grayling Well Park development is due to deliver cycle infrastructure improvements on Oakland’s way, these improvements include a toucan crossing, therefore to avoid additional disruption of any potential removal or amendments should be considered before being actioned.

Oaklands Way (Eastbound and Westbound combined) typically sees 19,100 vehicles using the road each day. Similarly, to Avenue de Chartres, there appears to be a slight increase in vehicle numbers from the week commencing 7th September, which is likely to coincide with schools reopening across the city. The cycle lanes do not appear to be affecting the number of vehicles using the road.

As with vehicle counting, it was paramount to capture the number of cyclists using the pop-up cycle lanes across the sites in Chichester. As mentioned previously, there are concerns around the counter loops used in the cycle lanes as it is possible for cyclists to use the lane but not cycle over the counting loops. This is an issue that is currently being discussed and resolved with the counter loop installers. It is likely that the true cyclist figures will increase with new fitment of loops covering the entire cycle lane. 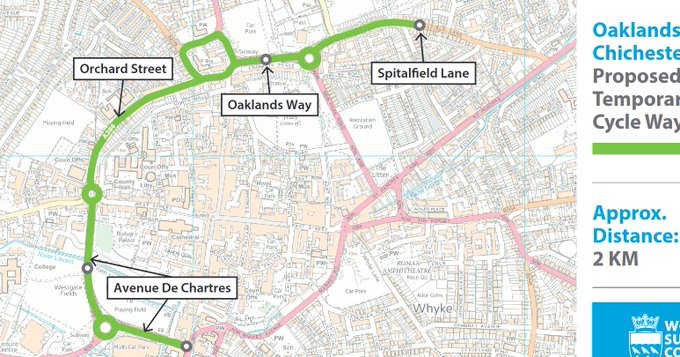